Objective: Program a simple test in Python, running on a Raspberry Pi, to control a large LED display in real time.

A previous project I’ve created is a large 8′ x 4′ LED board that displays randomized abstract patterns, run by an Arduino-compatible chipKIT UNO32 microcontroller. An example of the visuals produced can be viewed here (this is video of a smaller 4′ x 4′ display, but the result is the same). This exercise explores how to control that same board using a Raspberry Pi programmed with Python.

Here is video document of the result:

The code for this example is available via Github here (it’s the “joystick_move_test.py file”).

This program relies heavily on the Python Pygame library for the graphics, animation and joystick interfacing, and on the Adafruit Python WS2801 code to control the WS2801 LEDs via Python and the Adafruit Python GPIO library to interface the LEDs with the Pi’s pin outs. (These are the same Adafruit libraries that I’ve tried using in Processing’s Python mode on the Pi without success…but they work just fine in native Python.)

For the Pygame graphics and controller features, the following online tutorials were very valuable and used as a starting point:

As mentioned in the video, some visual glitching occasionally occurs on the LED board during the test. Using shorter (and perhaps thicker gauge) wires for the DATA and CLOCK connections between the Pi and the LEDs would likely alleviate or eliminate this issue.

In initial tests to transfer the Cloudscape display Processing sketch to run on the Pi, I encountered error issues when loading and playing back multiple audio events. The original sketch uses the Minim library which works great on other platforms and features easy controls for audio fading and amplitude analysis (to manipulate the intensity of the cloud LEDs as the audio files are playing). To further troubleshoot issues with Minim, and also test other audio library options, I created some Pi-based Processing sketches, which can be found here: https://github.com/richpath/Pi-audio-test. The README file explains the function and usage of each sketch.

First up in testing – the Minim library. Minim works fine for playing a limited number of audio files, but throws errors when multiple files are loaded for playback triggering: 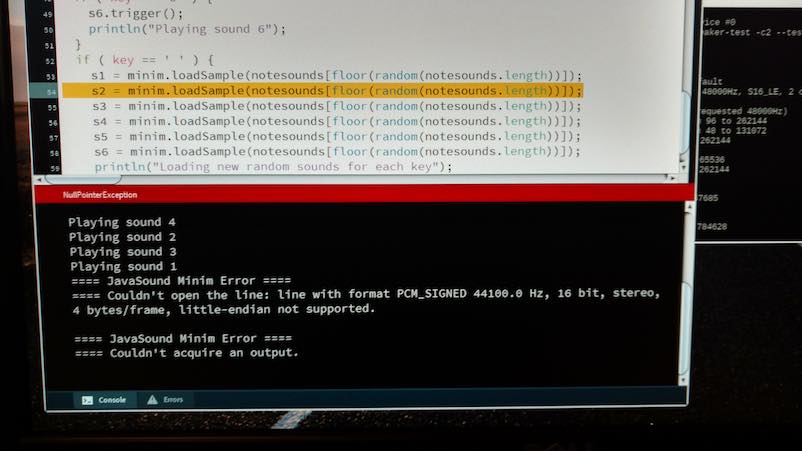 This occurs when the spacebar is pressed to reload a new set of random audio files into each AudioSample variable. It appears that Minim has limitations on the Pi regarding how many total files can be loaded into AudioPlayer or AudioSample objects. Increasing the available memory for Processing to run the sketch doesn’t solve the issue. Other Pi users have reported similar experiences: https://forum.processing.org/two/discussion/24254/minim-large-audio-files-work-on-windows-not-on-raspberry-pi and https://forum.processing.org/two/discussion/21953/why-can-i-only-load-four-audio-files-in-minum. In the later posting, the use of the AudioSample object works for the person; however, they are loading fewer samples than required by my program. Also, Minim will play back audio only through the Pi’s built in headphone jack using PCM, which is lower quality than using a dedicated USB audio interface.

Next I tried the standard Sound library that is included with Processing v3. The results are better…multiple sound files can be loaded multiple times without error. However, as with Minim, the Sound library will only play audio via PCM through the headphone jack, and simultaneous playback of multiple files results in sonic glitching and heavy distortion. Even when a USB audio device is set as the default output hardware in the Pi’s preferences, the Sound library still reverts to the headphone jack. There is an “AudioDevice” method, but it doesn’t feature a variable to select particular system audio hardware. Also, the GitHub site for this library states that it’s no longer being actively developed, and a new version of library for Processing is currently in development. The newer version will hopefully address the audio hardware selection issue; in the meantime, I continue to look elsewhere for a functioning audio playback solution.

Part 2 will explore using the Beads library – a link will be provided here when that post is published.

A small experiment using p5.js – create a loop of ellipses drawen in random sizes and colors that rise to the top of the canvas at random speeds, and move slightly left & right.

An issue to fix – once each ellipse moves beyond the top of the canvas (based on 0 minus current ellipse height), it should be moved back below the bottom (the canvas height value plus the current height of the ellipse), and then rise again from there. However, some of the shapes don’t get reset below the bottom of the canvas…they just appear in the visible lower portion and then begin their ascent. This causes a “popcorn” effect visually…more exploration is needed to figure out why this is happening…

The final version (…at least for now…) of my video “challenging current technical pathways”: SAFE

During the in-class critique last Friday (10/7), it became clear to me that the length of both sections – the collection of narrated accounts in the first half and the fictional ad in the second – had to be shortened. Given the deadline for the project and the footage that I had available to work with, it made more sense to keep the focus of this hypothetical technology related to children and their “protection”, instead of immediately including applications for adults as well. The news story screenshot montage at the beginning is still too “visually basic” for my tastes…perhaps that will be reworked in further exploration of video effects and filters (ah, the hat of compromise that sometimes must be donned when one hits a deadline…)

Most of the footage used in the ad section was shot during the Supernova outdoor animation festival, Sept. 24 in Denver, CO. The music track used for the ad is by Lusine ICL – “Headwind” from the album Language Barrier.